We’ve spent the last few days of our trip at an Airbnb in the Shinjuku neighborhood. It is centrally located and the host has been very helpful helping us navigate the city. We started the other day catching the tail end of the cherry blossoms in the park near the apartment. We just missed the full bloom but it was still nice to see. We continued our walk to Harajuku and Takeshita Street, which is a pedestrian-only street lined with shops and packed with people buying everything you can imagine. 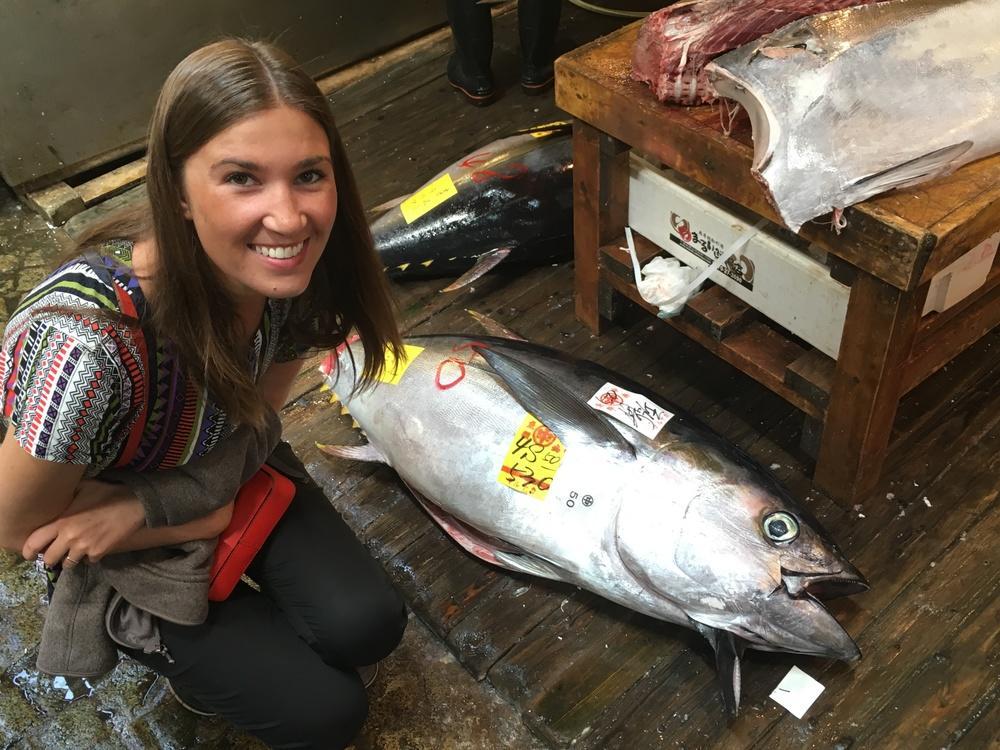 I only lasted about five minutes before making a break for it. Cole spent a little longer shopping then met me in line at Gindaco. I was walking around and saw this line of about 30 waiting for something so figured why not. It turns out they were waiting for takoyaki. Takoyaki is a battered and cooked wheat ball filled with it is minced octopus. I could only get down a few of the eight that came in an order before calling it quits. Nicole then had a blast at Kiddy Land, a six-story toy store while I wandered the streets. We were exhausted by the end of the day and had ramen and a beer in our neighborhood before hitting the hay.

The next day took us to Shibuya where we saw that Meiji shrine and had a conveyer belt dining experience. We spent about an hour mesmerized by the automated ordering and delivery system of our lunch. It wasn’t the best but certainly an experience. We were making our way through Shibuya 109, an eight story shopping building when the conveyer belt food took its toll. We opted to call it an afternoon for some R&R. After recovering from lunch, we had a great dinner of gyoza, pork ears, carrots and sardines. Probably not the best choice on a weak stomach but it was great.

We woke up today both feeling a bit weird. This is the end of a long road that took years to get to. I think we are both feeling a bit of uncertainty about the future and heading home. We wanted to make the most of it so started our morning at the Tsukiji fish market, one of the largest fish markets in the world. We didn’t recognize half of what we saw but it was great to see the market in action. We stopped for a tuna bowl for breakfast before heading to Tokyo tower.

We weren’t much in the mood to go up the tower but took it in from the street. We fulfilled one of Nicole’s dreams in the afternoon by getting her a Japanese chef’s knife. We were running out of steam but decided to stop at Senso-Ji temple and the Tokyo Skytree before a bit of rest. The temple is the oldest Buddhist temple in Tokyo and the Skytree is the tallest structure in Japan. I lost Cole for about an hour as she immersed herself in Japanese beauty products.

We had to recover in the afternoon for our last meal of the trip (if you don’t count airline food!). We had our Airbnb host make us reservations at Irifune because they don’t speak English. Irifune specializes in maguro sushi, tuna, and we heard that Chef Honda gets first pick each morning at the fish market. We had no idea fish could taste like that; it almost melted in your mouth.

We’re now sitting back at our apartment with a bottle of Sicilian wine. We thought it was fitting to end with where we started back in October. Tomorrow we finished the marathon week of travel with a twelve-hour flight to Chicago and a two- hour flight to Rochester. We both don’t quite know how to feel. I think we need to give it more time to sink in. We love you all.